The world is an archeological dig, and the sky is a traffic jam. #WorldDig

Nothing is better than investigation with an open mind. #AristotleStyle

Everything in the Bosnian Pyramid Complex  — every hill, every valley, every gully, every riverbed, every tumulus-shaped structure, every pyramid-shaped structure — is built.

What I call “step-downs,” which are generally between 1 and 2 meters tall, stretch for kilometers across the Bosnian Pyramids and across the hills that compose and surround the Complex.

The step-downs 1) transgress modern-day property lines (so they cannot be modern features) and 2) do not form terraces (so they can never have had any use in agricultural activities).

Let’s say that pyramids are energy machines. That would have given the ancients a reason to construct them. But why did the ancients construct non-pyramidal hills from the ground up, or in fact, from below the ground up, out of billions of tons of clay — hills such as Osijela Hill to the east of the Pyramid of the Sun and Kula Hill to the north? Why did the ancients create consistent step-downs on these hills? Where did the ancients get billions of tons of building material (primarily clay)? What kind of technology did they use to heat up the clay to make claystones and concrete that would last the ages?

Who were the ancients, and what were they up to?

The Artistic Technology of the Ancients: Osijela Hill

“This is an example of ancient terraforming: the ancients’ step-down. They used the step-down all over the pyramid complex here in Visoko. You can see the beauty of it. It’s really regular. Its function is unknown. We don’t know why they’re doing step-downs all over Bosnia, not just in the pyramid complex. . . . So the whole pyramid [the Bosnian Pyramid of the Sun] has these insistent horizontal features. And we can only surmise that this kind of geological engineering on the part of the ancients was part of an energy machine facilitation . . . It was helping the pyramid be what it wants to be, which is an energy mitigator, an energy amplifier, and, as Dr. Semir Osmanagić, discoverer of the Bosnian Pyramids, said, “a perpetual motion machine.” . . . I think what he meant by that was that this pyramid and others here in the complex, and others around the world — and he estimates that there are 100,000+ pyramids in the world, which is amazing, an amazing number: 100,000+ . . . okay, wow . . . then this is Pyramid Earth, right? — that these pyramids always have energy moving through. So the motion is the energy. So, unlike our “perpetual motion” machines which have moving parts, moving mechanical parts, these earthen, crystalline, stone, megalithic, lithic monuments built in ancient times, far, far in advance of our (what we call an advanced) civilization, let the energy move for various functions. And the latest idea is that these pyramids are part of a Cosmic Internet and that we can communicate through some of these structures, and do communicate, with other planets in other parts of the solar system, and can communicate with planets in other parts of the galaxy, using scalar wave technology that the ancients tapped into.”
“The Architecture of the Hills: Ancient Step-Downs in the Bosnian Pyramid Megacomplex – Exploring Osijela Hill and the Bosnian Pyramid of the Sun, May 20 and June 8, 2017″

“I just wanted to show you the way the ancients worked — with their incredible stone-working, and stone-creating, technology. This is hard baked clay. Some call this sandstone, but the primary ingredient is clay. Then you’ve got soft clay here. I can press in on this and leave a fingerprint . . . Earthquake-mitigating soft clay in between the harder baked clay layers. And you’ve got these incredible [vertical] seams. They always have the seams. So, soft clay, hard clay, soft clay, hard clay, soft clay, hard clay. Amazing. And even here, there’s little tiny layers within the hard clay, and then the seam. I mean, just imagine making this one [layered, earthquake-mitigating] stone, how long that would take you.”
“Exploring ancient stonework along the base of Osijela Hill in the Bosnian Pyramid Megacomplex, May 30, 2017″

Above: Slideshow of photos from Osijela Hill.

Below: Videos and articles showing and explicating the meticulous detail of the ancients’ stonework in creating Osijela Hill in the Bosnian Pyramid Complex.

[ Author’s Note: The stones below were found on Osijela Hill, just three of hundreds of thousands of textured construction stones created and placed by the ancients as part of a huge hill in the Bosnian Pyramid Complex. As of October 2017, you can see two of the Bosnian Rosetta Stones — Stones A and C — up close and personal, on your left just before entering the covered area at the entrance to Ravne Tunnel Labyrinth. The stones were too heavy for display in the Foundation’s museum, which was built 50 meters down the road. ]
“The Bosnian Rosetta Stones – Could they Be the Keys to Unlocking the Identity of the Builders of the Bosnian Pyramid Megacomplex?”

“The ‘experts’ will be our undoing . . . unless and until we remember and honor our authority. University education is both a blessing and a curse – a blessing because it provides distinctions and terminology; a curse because received ideas may take on the power of orthodoxical (religious) beliefs. . . . Anyone can do science. And you have to look with your eyes. And then you do your best to figure things out. That’s all. Just because you have a degree from a prestigious university doesn’t mean you’re right. Because it just so happens that people with degrees from prestigious universities disagree about things all the time. So, the question is, ‘What do you see with your eyes? What’s your best theory?’ And then you put that out there to the scientific audience – which is to say, to the global mind, since we’re all scientists – and then we see whose theory is the theory that does the best in the opinion of the global mind.”
“Chasing Osijela Hill: The Bosnian Pyramid Megacomplex: Clay Quarry or Built Hill?”

What did the ancients mean when they talked about clay? The etymology of clay is glue.
“The Game of Glue: Exploring Osijela Hill in the Bosnian Pyramid Megacomplex, June 9, 2017″

“The Bosnian Rosetta Stone, shaped and worked in its entirety in ancient times, bears signs, not only of the surface texturing (deep gouging) that marks the top of most of the ancient clay construction stones in the Bosnian Pyramid Megacomplex, but it also, astonishingly, shows signs of either 1) spatula-like tool marks or 2) finger marks or finger-like marks. What ancient advanced civilization made this textured stone and millions of others like it 30,000+ years ago? Let’s continue the investigation in the Visoko, Bosnia area.”
“Beautifully textured ancient artificial construction stones, Osijela Hill, May 13, 2017″

Osijela Hill is a huge hill, built in ancient times, that sits directly across the Fojnica River from the Bosnian Pyramid of the Sun, the tallest documented pyramid in the world.
“Trek to Osijela Hill: The Artistic Technology of the Ancients, May 8, 2017″

Writer-videographer Jock Doubleday explores Osijela Hill, which lies directly east (across the Fojnica River) from the Bosnian Pyramid of the Sun, in search of a lost baked, textured claystone made by the ancients and left with finger-like marks, or spatula-like tool marks. Visoko, Bosnia, April 22, 2017.
“Trek to Osijela Hill: Search for the Lost Stone, with Jock Doubleday, Visoko, Bosnia, April 22, 2017″

Osijela hill, a hill built in ancient times of clay and claystone layers, sits directly across the Fojnica River valley from the Bosnian Pyramid of the Sun. Photo by Jock Doubleday, February 9, 2015. 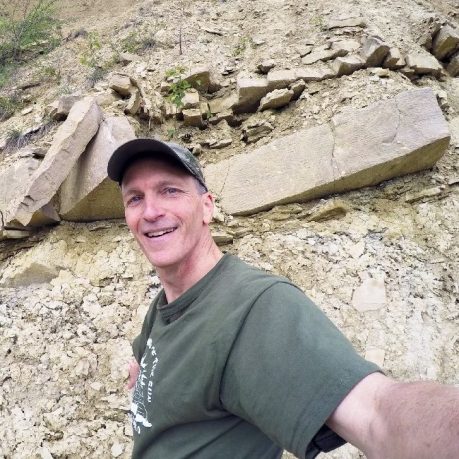 Jock Doubleday is a writer, researcher, stoneworker, and videographer. For 16 months in 2014 and 2015, and for an additional four months in 2017, he worked as official videographer for Archaeological Park: Bosnian Pyramid of the Sun Foundation, a nonprofit Bosnian NGO foundation created by Dr. Sam Osmanagich on November 9, 2005 in Sarajevo, Bosnia-Herzegovina. Doubleday’s articles on the Bosnian Pyramids, and on other ancient megalithic monuments and civilizations, can be found at https://anamericaninbosnia.wordpress.com/ and at http://anamericaninbosnia.blogspot.com. Some of his videos about the Bosnian Pyramid Complex, especially those shot in 2014 and 2015, can be found at https://vimeo.com/user29144093. Most of his archaeology-related videos can be found at http://youtube.com/BosnianPyramids. Other archaeology-related videos can be found on his personal Youtube channel. For daily updates on archaeological progress in the Bosnian Pyramid Complex, please feel free to visit the Facebook page he administers, https://www.facebook.com/SemirOsmanagich. This Facebook page also provides information on ancient history in general as well as on the newest science (the “electric universe”). His books-in-progress, “Paradigm Shift: The Gradual Awakening of Science to the Possibility of Advanced Human Civilizations in the Distant Past: The Bosnian Pyramid Megacomplex,” and “Who Built the Earth? An Exploration of Geological, Geophysical, Seismological, and Astrophysical Evidence for an Earth Constructed by an Advanced Race or Races in the Distant Past,” will be published soon. To contact Jock Doubleday, please write jockdoubleday.writer@gmail.com.

More about the Bosnian Pyramid Complex

“What is a scientist? A good scientist, a real scientist, is one who bypasses cultural indoctrination, the indoctrination of the language that we use — which has its own pitfalls, its own traps — and the indoctrination of the universities, which tell us how to think. Sometimes the universities are correct. Sometimes they’re not. If they’re not, then the student, when he or she goes out into the world, needs to bypass that indoctrination. And so we have, in the sciences, a massive amount of incorrect information being taught as truth. Big problem. Then the students go out, and they have difficulty . . . overcoming that indoctrination, filtering it out, to see what they’re really looking at. Because you can look at this [excavation of the Bosnian Pyramid of the Sun], and if you’re a graduate of a school of archaeology, you’ll see sedimentary layers.” – Jock Doubleday
“Filtering out university indoctrination: The Bosnian Pyramid Megacomplex, August 29, 2017″

“It’s an astonishing feat of engineering, all these structures tied together at the base through the riverbed so there’s no way for the water in the river to get under the structures. Because the water is flowing over the megastructure that is the Complex. And all these structures are tied together. So the Pyramid of the Moon – it’s not like they built it on the earth and then went over here and built Osijela Hill. No. They tied everything. Everything’s built. Everything’s tied together. Impossible, except maybe over millions of years, to erode this.”
“Megastructure: The Fojnica Riverbed Winding through the Bosnian Pyramid Complex Is an Ancient Artificial Megalithic Structure (January 23, 2018)” 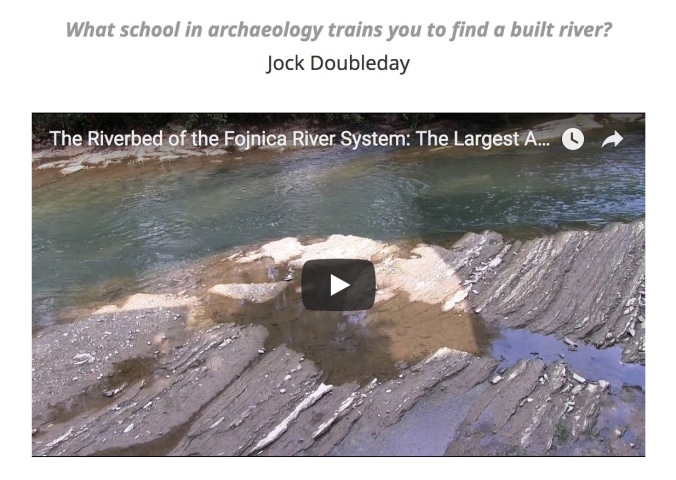 “The river that winds through the complex, the Fojnica Rijeka river, is built. So, the ancients who built the pyramid complex here in Visoko, Bosnia started with the river, presumably, and built it from the riverbed up. So the middle of the river is the starting point of the Bosnian Pyramid of the Sun, as it is the starting point of the Bosnian Pyramid of the Moon, Osijela Hill, and all the structures that line the river. . . . It’s an astonishing feat of engineering, all these structures tied together at the base through the riverbed so there’s no way for the water in the river to get under the structures. Because the water is flowing over the megastructure that is the complex. And all these structures are tied together. So the Pyramid of the Moon — it’s not like they built it on the earth and then went over here and built Osijela Hill. No. They tied everything. Everything’s built. Everything’s tied together. Impossible, except maybe over millions of years, to erode this.”
“The Relationship of Structures in the Bosnian Pyramid Megacomplex, September 18, 2017″